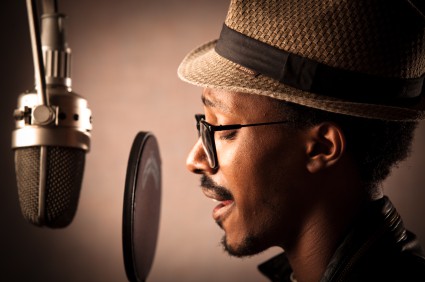 After looking around online, I haven’t found any articles specifically directed to the genders, and since we are so different, I thought it’d be great to write an article where I specifically give Singing Tips for Guys (don’t worry ladies… your article is coming soon).To do this, I’m going to first point out the unique qualities we have as guys, and then talk about how that effects our voices. So, let’s get down to it.

Guys Have a Wider “Chest Voice” RangeChest Voice is the stronger voice that most people speak in, but when it comes to singing, us guys have a much larger “chest voice” singing range than the females do. For this reason, guys typically feel much more comfortable singing in chest voice. This is fine until we want to start singing higher notes.If we hold onto chest voice as we ascend, there’s going to be too much pressure for us to sing those high notes, which will eventually lead to our voices cracking. In order to avoid this, a singer must narrow and consciously not add pressure to transition through their bridges (the first bridge is typically found at middle C, the next is around the F#/G area above that).Having a solid chest voice is a great asset, but pulling chest voice too high makes singing high notes nearly impossible. So keep this in mind when you’re moving to the upper part of your range.Guys Have Testosterone And Therefore Tend to be More AggressiveTestosterone, in my opinion, is a blessing for many different reasons. But, when it comes to singing, it typically makes us more aggressive. This isn’t always a bad thing… some singers need to be more aggressive. But more often than not, it causes us to try too hard, resulting in creating unnecessary tension in the voice.

In order to get past this, it’s important to remember that the fullness of the sound while singing is created by space, not effort. Singing requires a delicate balance, and if you start trying to force things to happen, it’s going to knock that balance out of wack. So the next time you get frustrated because you’re having difficulty singing something, instead of turning aggressive, try relaxing and allowing the sound to come out at more of a speech level instead. You’ll almost always get better results this way.

Ahhh, the infamous voice change. To a girl, it’s inconvenient… to a guy, it changes his world. I love the analogy I heard from a fellow vocal instructor, Wendy Parr – Imagine one morning you wake up and your legs are two feet longer. Now, imagine trying to walk. That awkwardness in coordination is similar to what a guy goes through during his voice change.

If you’re going through your voice change, I feel for you, as it’s not always the easiest thing. To me, one of the best things you can do is work on maintaining a steady flow of air, then work on making sure that your larynx doesn’t jump around like crazy while using your voice. You can learn more about these two things in the articles Breathing and Singing and How to Sing High Notes on another website of mine.

I figured I’d end this on a high note… no pun intended. If you’re a guy in the performing field, then you’re likely to have much less competition than your female friends, especially when growing up. There are probably 2-5 girls for every guy at an audition,

which means you have much better odds both for getting the role, and finding yourself a girlfriend afterward. 🙂

…this should make the voice change a little bit less painful.

I hope you guys have enjoyed this article. If you have any questions, feel free to leave a comment below and I’ll try and respond.

Also Check Out:
Singing For Beginners
How to Sing a Little Higher if Your Voice is Low