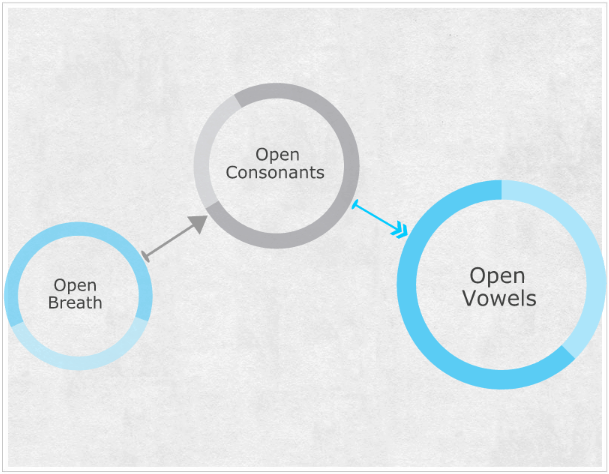 We’ve already discussed the importance of resonance space and how that openness is what creates the fullness of your sound. But, I wanted to take a moment to break this “how to sing openly” thing down in a different way, so that hopefully it’d click with a different group of singers. So, in this article, we’re going to start with singing open vowels, then elaborate on how to better sing open. Okay, here we go…

I don’t know how many voice teachers/choir directors have told me to sing with tall, open vowels in my life, but it’s been a lot. Opening the vowels vertically is an important part of singing without question, but I’ve discovered the more I sing, the more it’s not just about opening the vowels, but staying open consistently the whole time. This made me start to look at the “Sing on the vowels” or “Open the vowels” thing and question whether or not that was enough. In my mind, it’s not. Here’s why…

In order to have an effortlessly open space while singing on the vowel, we need to be in that space before we get there. If we have momentum with this placement, we’ll be able to sing openly much more easily. So, singing with open vowels really isn’t enough. In my mind, the vertical, open space in the back of our mouth starts before the vowel. It should be present behind the consonant while we sing it, so that we can effortlessly move straight into it once we’re finished sounding the consonant and move onto the vowel.

Doing this helps to create an easy, seamless transition between vowel and consonant, maintaining the open space easily, instead of possible moving from a less open (and often tense) space with the consonant, to a more open space that often times holds small parts of that tension. Hopefully this makes sense.

So, to me, singing with an open space behind the consonant is just as important as having the vowel open. However, there’s actually one more place that we can be open before we start to sing the consonant… the breath.

Many singers when they inhale breathe through a smaller, slightly held or tense space. If you do this, then when you make the transition between breathing and singing (be it a consonant or a vowel), you’re likely to carry some of that tension or less than optimal placement over to your singing. This is no bueno.

So, when you’re looking to sing, the opening process should look something like this:

When we accomplish this, we’ll have momentum when singing, the space will remain open at all times, and we’ll work less hard when transitioning between breathing and singing, consonants and vowels, and from word to word.

I know this was a little bit complex to explain in writing, but I hope this makes sense and helps. Try it out and see how helpful it can be in your singing!